Rising Urban Floods in the Country 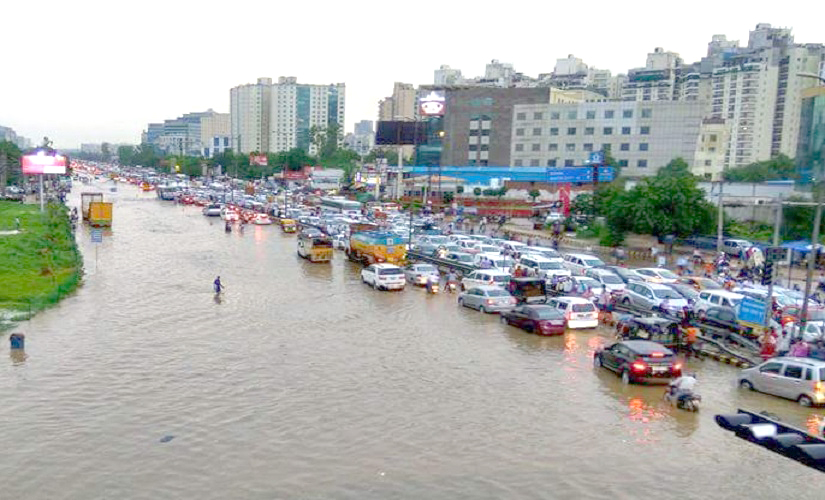 From the recent flooding chaos in Gurgaon and Bangalore to the Chennai floods in 2015, these events are true examples of how demographic changes and mindless urbanization lead to urban flooding.  It’s high time for the municipal authorities to focus on more sustainable planning, to avoid such incidents in the future.

Gurugram, touted to be India’s Millennium City, is one of the most talked about commercial hubs in India. Home to a large number of corporate organizations, the city witnesses daily migration of millions of people.

Last week on July 27-28,2016  the millennium city was reeling under massive water logging and long winding traffic jams, giving nightmares to road travellers and its occupants. Unable to provide adequate support, the various authorities just went on to blame one another.

The event started with incessant monsoon rains causing the breach of Badshahpur drain in Sector 34, after huge volumes of excess water were pumped into the drain. Over four feet deep water inundated various locations near the Delhi-Gurgaon expressway.

Some stretches of NH8 were submerged under three feet of water. Traffic on the highway was completely blocked, stranding thousands of commuters and office goers. Many motorists left their vehicles and waded through the river-like roads on both sides of the carriageways of the Delhi-Jaipur highway, with the traffic trailing up to 15-20 kilometers.

As one of India’s most upcoming global hubs, Gurgaon has witnessed large scale construction activities in the last few decades. Concretization of roads and increasing built up area has led to the obstruction of all natural drain channels in the city. Also, all the major drains have experienced a reduction in their carrying capacity due to being filled up with concrete debris or garbage. Whenever there is a heavy downpour, these drain channels are unable to contain excess water, and it spreads over onto the highway, city roads and other built up areas.

Moreover, there has been a silent change in the topography of Gurgaon with gradual extinction of its natural water / drainage channels. Blindfolded urbanization has led to drying up of the various lakes and reservoirs in the city with the situation further worsening due to unprecedented construction on these dried up water bodies.

A Similar Situation in Bangalore

The incessant rains saw several areas of the city inundated with water, as well as lakes breaching and entering into houses. One could find humor laden images on social media of people using fishing nets to catch any fish that might have strayed out of the overflowing lakes.

The frequent flooding in Bangalore is also a result of various man-made activities over the last few decades. The lakes of the city have been used for urban infrastructure. As a result, only 17 lakes exist in the heart of the city, as against 51 healthy lakes in 1985.

Rise in Urban Floods across India

Urban floods occur due to a variety of reasons including meteorological, hydrological and human factors. These floods cause considerable damage to property and life, which in turn triggers large insurance claims. Over the last decade, two major flood events including Mumbai 2005 and Surat 2006 caused estimated claims of about INR 5000 Cr and 3500 Cr respectively. The most recent Chennai Floods in 2015 were also estimated to generate claims between INR 3500 to 5000 Cr.

Why are Urban Floods happening?

Most of the urban floods start due to water logging. When the heavy rainfall continues over several days, the water bodies start to overtop leading to disastrous floods. What was seen in Gurgaon & Bangalore was the first stage of urban flooding while in Chennai we saw a combination of both the above.

In general, the principle reasons for urban flooding are drastic reduction in the water bodies of a city and rapid increase in built-up areas. Additionally, unplanned urbanization drastically alters the natural topography of the region and leads to reduced water carrying capacity of natural drains due to encroachment, silting and poor sewer management. The garbage disposal in the storm water drains further chokes their water carrying capacity, leading to overflowing of the drains during heavy rain events.

Inefficiency of the storm water drains coupled with an altered topography becomes the recipe for waterlogging in the city.

More and more wet lands, open spaces, tanks and green areas are being converted to urban and suburban areas. This leads to more impervious surfaces, lesser water infiltration into the ground and increased surface flow of water. To make things worse, climate change projections indicate increase in the frequency of intense rainfall events.

What do we need to do?

While words like ‘Global’ and ‘Smart’ cities sound good to the ear, it is critical for municipal corporations and state authorities to first look into the ground realities of a city before planning further growth.

The authorities need to conduct a detailed analysis of the water carrying capacity of storm water drains, natural drains and existing water bodies. It is equally important to understand the change in water flow due to the changing topography. All this can be achieved through hydrological and hydraulic modeling of the region and the storm water network.

India FloodRisk™ combines hydrological and hydraulic modeling techniques with statistical probabilistic flood risk modeling to estimate flood risk for the entire country.  This is the only model that captures both riverine as well as flash floods. It is based on 50 years of flow data and 109 years of rainfall data that reduces the uncertainty due to derived flows and ensures fairly accurate representation of man-made floods.

RMSI has been providing complimentary initial flood advisory and flood maps of live flood events to the Indian insurance industry to help them better understand the flood events in India and their impact. India FloodRisk™ model has been used to come out with a Top 10 list of the most flood prone cities in the country (Figure1). Both Bangalore and Gurgaon fall in the Top 5 most flood prone cities as per the current conditions on the ground.

It is high time that the authorities take note of these alarms and ensure proper planning of these cities, starting with the steps outlined above, lest, we should be ready to brace huge losses to human life and property and the economy at large.

For any queries write in to info@rmsi.com