Lightning: An Atmospheric Hazard in India Likely to Get Worse in Future 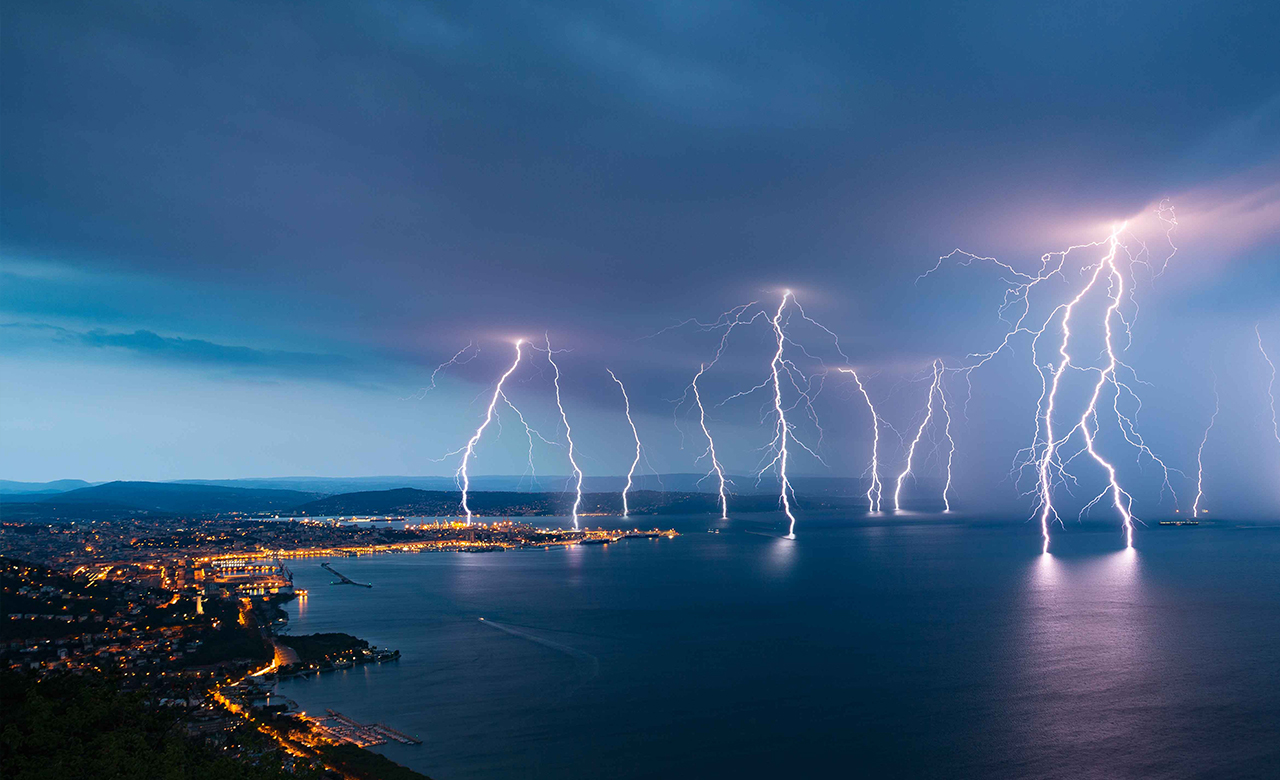 Over a period of 50 years, lightning strikes have been the leading cause of disaster-related deaths, but this phenomenon has not been formally recognized as a disaster.

Lighting is acknowledged as one of the most powerful atmospheric hazards humankind has ever encountered. It is a rapid and massive discharge of electricity in the atmosphere with a common occurrence, especially in tropical and subtropical regions, resulting in numerous deaths every year.

There are two common types of lightning: cloud to ground and cloud to cloud.

Cloud to ground lightning is considered the most dangerous: It mainly consists of positively charged particles, while the bottom of thunderstorm clouds has negatively charged particles. As a result, lightning can heat the air it passes through to 30,000oC (5 times hotter than the sun’s surface). In lightning strikes, the heat vaporizes any water in its path, possibly blowing away a strip of bark or causing the tree to explode. Though a by-product of storms, lightning occurrences have been found to cause the most significant damage to life, with a death toll of more than 2500 every year globally over the last two decades. A typical lightning flash is about 300 million Volts and about 30,000 Amps.

How Thunderclouds Develop and lead to Lightning

When water vapor moves upwards in the cloud and condenses into the water due to decreasing temperatures, a massive amount of heat is generated, pushing the water molecules further up. Droplets change into tiny ice crystals as they move to temperatures below zero. While they continue upwards, they gather mass until it becomes so heavy that they start descending. The result is a system in which smaller ice crystals rise while larger ones come down. Collisions result in the release of electrons, which is very similar to the generation of electric sparks. Collisions and electrons occur more often by moving free electrons, resulting in a chain reaction. The process results in a situation where the top layer of the cloud gets positively charged while the middle/lower layer is negatively charged. The electrical potential difference between the two layers is enormous, at billions of volts. In no time, a huge current, of lakhs to millions of amperes, starts to flow between the layers leading to the heating of the air column. Because of this heat, the air column looks red during lightning. The heated air column expands and produces shock waves that result in thunder sounds. 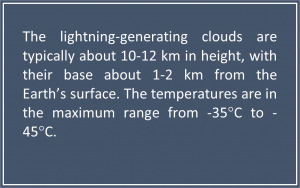 The Earth is a good conductor of electricity. However, while it is electrically neutral, it has a relatively positive charge compared to the middle layer of the cloud. As a result, it causes approximately 20-25% of the current flow to be directed toward the Earth. It is this current flow that results in damage to life and property. Lightning is more likely to strike raised objects on the ground, such as trees or buildings. Once they are near the ground, about 80-100 m from the surface, they tend to redirect their course to hit the taller objects.

Why Lightning strikes are a Risk in India

Most lightning strikes are generated within the cloud and are beyond human control. However, when two different kinds of air masses (i.e., cold–moist and dry–hot) coming from different directions are forced to rise, they flow together or converge to form thunderstorms. These clouds acquire an excess electrical charge, either positive or negative, that is sufficient to break down the resistance of the air to produce thunder and lightning.

Lightning has been the leading cause of death from natural disasters in India since the records began (Figure 3). However, as records observed show, the fatality rates have increased over the decades in all regions except northwest India. The highest fatality rates were consistently observed in west-central, central, and Peninsular Indian states. Seasonally, 57% of the lightning fatalities occurred in the monsoon season (June–September), followed by 31% in summer or pre-monsoon (March-May), whereas post-monsoon (October – November) and winter (December – February) accounted for a relatively smaller number of fatalities.

Coastal regions where land-sea breeze interactions dominate thunderstorm activity show high lightning activity near the coastline, where the maximum thunderstorm activity occurs during the afternoon and the summer. Night-time lighting is also observed in regions with complex terrains, such as in the hilly states of India and particularly in the western Himalayas. These findings agree with the observed seasonal total lightning flash counts and the frequency of thunderstorm days during different seasons in India. During the pre-monsoon and monsoon seasons, the development of the inter-tropical convergence zone favors the formation of thunderstorms and lightning. Availability of moisture and low-level winds also play a dominant role in forming these thunderstorms. The higher magnitude of lightning flash count during April–June indicates unstable atmospheric conditions and electrical vigor over the Indian region. The frequency of occurrence gradually decreases after June, suggesting that the electrical energy is significantly diminished with the advent of the monsoonal regime.

It was a significant 34% rise over a similar period during the previous year (13.8 million strikes). Odisha, Madhya Pradesh, Chhattisgarh, West Bengal, and Jharkhand have witnessed the maximum lightning strikes. Uttar Pradesh is at the top of the list as it reported 301 lightning deaths in 2019, followed by Madhya Pradesh (238) and Bihar with 231 lightning deaths (Figure 4). In 2021, Odisha State lost 213 human lives due to lightning strikes, the highest in the country. Far more males (relatively higher outdoor and labour-intensive work participation) than females have been killed by lightning flashes in India. Lightning also causes more than 80 percent of all accidental livestock deaths. A lightning bolt can travel through a tree and is transferred to the cows standing under a wet tree or in water when the lightning hits (Figure 5). Around 35 cows were killed when lightning struck a cattle shelter in Phulpur tehsil of Allahabad district in Uttar Pradesh in July 2019. 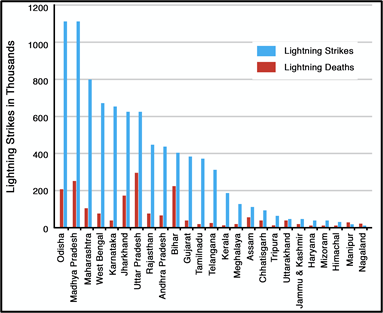 Figure 4: Number of lightning strikes (in thousands-blue) and number of deaths (red) in various states of India during 2019

During the last decade, the increase in global surface temperature has reached around 1.08°C above the 1850–1900 level. The evidence for observed transitions and attribution to human influence has strengthened for many types of extreme events in recent years. It is particularly true for extreme precipitation events, droughts, tropical cyclones, marine heatwaves, excessive sea levels, and compound extremes. A recent study has suggested that a rise in average global temperatures by 1oC would increase the frequency of lightning by at least 12%. 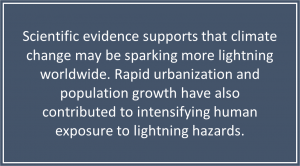 The year 2021 was the fifth warmest reported in India over the past 121 years, according to the annual climate statement released by India Meteorological Department (IMD). Last year, some 750 people died due to heavy rain and flood-related incidents, while around 780 people died from thunderstorms and lightning in different parts of India (including 213 people in Odisha).  During the past few decades, an increase in temperature has led to a rise in moisture ingress over the Indian sub-continent; consequently, the frequency and severity of intense convective activity resulting in thunderstorms and lightning have shown a steep rise in India. Studies suggest that a minimum 10% increase in lightning activity can be expected for every 1oC rise in surface air temperature increase due to global warming. Furthermore, a 1oC rise in surface temperature over India can lead to a systematic increase in convective available potential energy (CAPE) attributed to thermodynamic instability conditions and large-scale dynamics, resulting in a 20%–40% enhancement in average lightning flash density. 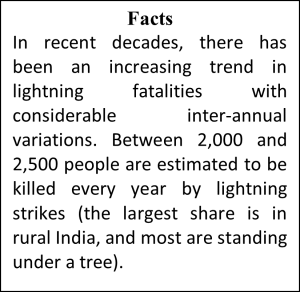 People working outside or participating in outdoor activities are more likely to be struck by lightning, particularly during the summer and rainy seasons. Lightning strikes may be rare, but they still occur, posing a severe risk of injury or death.

Thunderstorms can develop with little to no warning depending on the season and atmospheric conditions. In light of this, we recommend that everyone be educated and proactive in identifying preventative measures to guard against the deadly effects of lightning. If we hear the sound of thunder within 30 seconds of seeing lightning, it is an indicator of the presence of lightning around us. A few of the safety guidelines to protect ourselves from lightning are listed as under:

While the impact of climate change is uncertain, implementing simple measures like lightning detection systems could go a long way to combat this long-neglected disaster. However, we need aggressive actions by governments to ensure the protocols are implemented and ensure the most vulnerable people, who are often the poorest and least privileged, are protected.